I am hooked. Well I have been for some time now but it has become more prominent in my day to day lifestyle.
Green Tea.

Whenever I would stay at my friend Monica's house we would drink cup after cup of tea.  Trying different flavors, or just trying to stay awake.
Now I find myself accepting a cup whenever offered or craving a cup when I wake in the morning or after dinner.
Could I be addicted?

I think of all things to be addicted to, Green Tea is probably one of the better options considering it helps in lowering cholesterol, fighting infectious cells, and maintaining a healthy weight.
Now as long as I can continue eating as much fruit as possible and maybe a glass of red wine each night with dinner, I think healthiness will be in my favor!﻿
Posted by Unknown at 10:24 AM No comments:

Email ThisBlogThis!Share to TwitterShare to FacebookShare to Pinterest
Labels: Better Me, Drink

Do you ever feel like the days that you want to last forever never do and the ones you wish would just fly by seem to last the longest? Or your doing everything you can to make something right and it always seems to go wrong?﻿
I'm beginning to feel that way about my weeks.  I have decided to let bygones be bygones and just take each day one step at a time. I feel like I say this all the time and then I get wrapped up in something within that DAY that I'm trying tackle.  But I have found, going to bed a little earlier, making time to watch my favorite shows, and setting nights aside to see the ones I love is really helping!  I'm still able to make time to get everything I need to do, done as well as containing a social life in the process.
Everything always works out in the end.
Posted by Unknown at 7:35 AM No comments:

It's March!
As if most of you are not aware of the month, seeing that March Madness is prominent on every screen in every home and bar.
It's been awhile so it's time to play catch up!
Starting with...
Opie, of course! 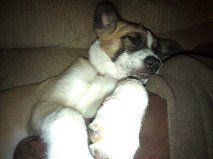 We just had our "3 month check up" which for him was actually his 3 1/2 month check up, since we had a bit of a late start.  Opie has literally doubled in size since the vet last saw him.  I noticed he was growing, his nose is longer, his belly is smaller and he is now taller then the little dogs he likes to play with.  When we first brought him to the vet on Feb. 14th, he weighed in at 7 lbs, so little!  This time around he weighed in at 13.6 lbs, so not quite 14 lbs but nearly.  He has now mastered (aside from a few accidents) going potty outside and we even went as far to teach him "sit" and "lay".
He is so smart!
We started off the month visiting Ryan's older brother!
It was so nice getting to see them and spending time with William, not to mention Opie was totally worn out from playing with Ziggy the moment he woke up to the moment we took him upstairs to go to bed.  It was nice being able to sit around and do nothing for once.

And as you can see I was the only one awake the entire drive home.
Last Saturday Ryan and I had the opportunity to hang out with some of our friends that we don't normally get the chance to see.  We all attended Beertopia which allowed us to travel from tent to tent, tasting different beers from an abundant list of breweries.
﻿﻿﻿﻿﻿

1st photo - http://tomhendersonphotography.instaproofs.com/buy_print.php?fav=0&col=0&id=151309059&type=original&eventId=562269
2nd photo - http://tomhendersonphotography.instaproofs.com/buy_print.php?event=562269&type=original&id=151309185
3rd phot - http://www.flickr.com/photos/harveyshepard/5526460547/in/photostream
I honestly felt that I was going to know, or have tasted most of the beers offered, but to my surprise, many of the breweries I had never even heard of!  It was a lot of fun, and really great getting to see the faces of those I miss seeing on a regular basis.
It has been over a month now that my brother has been in the Airforce!  Mom keeps me updated after speaking to him when he is offered the chance to call.  He has really come into his own, who would have guessed that my little brother thrives off structure!  He was named the leader of his group and takes on the responsibility of making sure everything is kept in order, while accepting the discipline if it does not.  I am so proud of him and the decisions that he has made! I miss him everyday and hope all the while that he is happy and enjoying every moment of it!
As most know, this is my (hopefully) last full semester as an undergraduate.  I loved interning at Charlotte Parent in the fall so much and in knowing that I am receiving credit for the work I am doing and gaining experience that many may not have coming out of college to boot, I could not resist doing another!
This past Tuesday, I have been accepted to intern for the Charlotte Observer Magazine this summer.  I am so excited for all that they have planned for me!

But this discussion will be left for a later date.