Wow has it been awhile!
I feel though that this time I have an excuse.
First, Valentines with Ryan was celebrated a little early.  We went to Carrabas for dinner and ate way to much food!
We devoured the first basket of bread that was brought to the table and said yes to a second basket, which arrived at the same time as our appetizer.
Yummy Calamari!
Once finishing the last few, we were served our salads then our meals.  Luckily for me I had food for lunch the next day!
We then scooted over to Concord Mills to see Chronicle.
﻿﻿
The movie was so-so, but Ryan liked it and then that was all that mattered because the next day (Monday) Ryan and I woke around 10:30 a.m. to pick up the newest addition to our apartment and one of the best Valentine's Day gifts yet!
OPIE 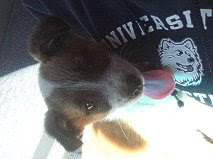 Sorry he is a little sideways here! Picking up Opie was so exciting! We drove all the way to South Carolina to get him, and as the lady handed him over all I could do was love him. 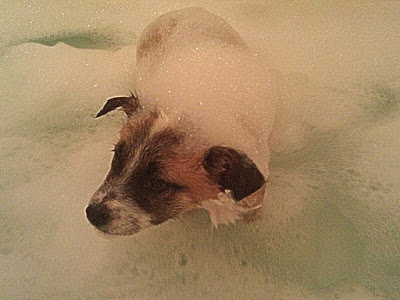 He was very dirty when we picked him up, so our friend Kortney let us give him a bath at her house once we returned to Charlotte.  The bath water was literally black from all the dirt and grime.  We then brought him to our friend Kristen and Dustin's house, where we gave him two more baths.  The poor guy didn't know what to do! 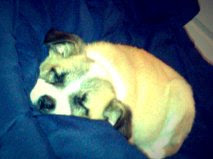 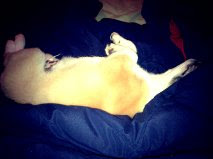 He was so tired!
He slept for two whole days, aside from the moments that Ryan and I would wake him up to go outside, the vet, or to play.
It wasn't long till his eyes were shut and he was sleeping...again!
﻿

Now that he is up-to-date on his shots, and his sleep, he is all play!
Making friends with everyone he is coming into contact with
leaving no one un-kissed.
Posted by Unknown at 5:35 PM