Ale's For Me. Ale's For You. And A Stout Of Course.

I love going out and having a good time and I know that there are some that want to explore other beers also
so,
I thought it would be a good idea to spotlight breweries as I come across them or are told about them.
Todays brewery:

“From man’s sweat and God’s love, beer came into the world.”
- Saint Arnold of Metz
The Patron Saint of Brewers
All Rogue Ales are sealed in a brown glass (better shelf life) using an oxygen absorbing cap. 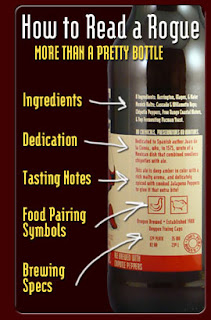 They also vow to never include preservatives, additives or chemicals!

Dead Guy Ale.
German Maierbock Ale.
History:
Created in the early 1990s to celebrate the Mayan Day of the Dead (Nov. 1st, All Souls Day) for Casa U Betcha in Portland, Oregon.
Absolutely delicious! One of my favorite beers and is a great gateway into darker beers.

Pumpkin  Patch Ale.
How it's made:
Using real pumpkins from a patch 77 miles away from the brewery!
Pumpkins are roasted and added to a kettle to create the batch.  Ingredients that are also included are ginger, vanilla bean, cinnamon, and nutmeg.
I can't wait to find this beer and taste it for myself! ﻿

Chocolate Stout.
American Stout.
History:
This stout was released on Valentine's Day in 2001!
Made with natural chocolate flavoring, this beer will leave that bitter-sweet finish many of us search for in a beer.
We have this beer on tap at Taco Mac in Huntersville and I am more than excited to get my hands on it!
All Picture and Brewery Information from Rogue Ales.
Posted by Unknown at 11:43 AM