A Brewery You Can't Say No To.

Just as promised!
Today's brewery:
"Good People Drink Good Beer" - Hunter S. Thompson
Although I love Rogue, you really cannot go wrong with a Flying Dog beer.
Every beer that I have ever tried from this brewery I have loved.
They all encompass the smoothness that one would normally look for in a beer, yet they don't always finish off smooth, which is a nice surprise if you ask me.
George Stranahan
Founder of Flying Dog.
The mastermind behind it all.
By simply noticing a picture of a flying dog that just didn't seem to fit, Stranahan did what most of us wish we could do, he created an amazing company out something some people saw everyday.
﻿﻿﻿﻿ 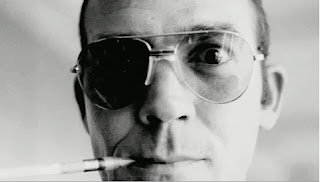 Hunter S. Thompson
An amazing man alone, played one role in Flying Dog, introducing the man above (Stranahan) to the man below (Steadman).
*Won't allow me to add. Picture via flyingdogales.com
﻿﻿﻿﻿

﻿Ralph Steadman
Illustrator for Flying Dog.
A genius really.
Illustrated many of Thompson's articles and books.
﻿﻿ Road Dog Porter was the first beer label that he illustrated for Stranahan.  He added "Good Beer. No Shit." and Stranahan liked where Steadman was headed, they even fought the American Civil Liberties Union to keep the phrase on the label.
Onto the beers.
First up:

Gonzo
Imperial Porter.
A part of the Canis Major Line-Up.

This was the first Flying Dog beer I ever tried, thanks to my friend Amy Buechler, it was love at first taste.
Gonzo has a very bold taste with notes of chocolate, coffee, and vanilla.
Very smooth with a bite at the finish.

As most of you may know, Gonzo was made as a tribute to Hunter S. Thompson soon after he died.
For those of you who don't know who Hunter S. Thompson is, he is widely known for his story Fear and Loathing in Las Vegas.
The awesome, and at times confusing, story of a journalist (Thompson) and his attorney traveling to Las Vegas to cover a motorcycle race....among other things.

Yum! I have become a big fan of hefeweizens.
You really can't go wrong if you are looking for a beer with loads of flavor.  Some may turn with disgust because of the tart/bitter taste of most hefeweizens, you will be pleasantly surprised to find that this beer is lighter than most hefeweizens and easy to drink.


To keep with the three beers a brewery that I have already done, I introduce to you another of my favorite's out of the Flying Dog selection:

This pale ale is neither heavy nor light but does lean more towards the thicker side.  Contains a sweeter beginning that leads into a slightly bitter finish.
I'm not usually a fan of beers that have a citrus flavor in the mix but it doesn't stand out as much which is nice.

Great beer to order if you're looking to try something new that's darker than the go-to lager.
﻿*Background Information Found at Flying Dog Ales.
Posted by Unknown at 4:09 PM